Rich Kizer and Georganne Bender are consumer anthropologists, speakers, authors and consultants whose client list reads like a "Who's Who" in business. Companies internationally depend upon them for timely advice on consumers and the changing retail market place.

KIZER & BENDER are contributors to MSNBC’s television program Your Business. They made Meetings & Conventions Magazine's list of Meeting Planners Favorite Keynote Speakers, have been named two of Retailing's Most Influential People, are included in the Top 40 Omnichannel Retail Influencers, and the Top 50 Retail Influencers four years running. Their award-winning Retail Adventures blog was named the Top Retail Blog by PR Newswire Media, and is included in the Top 25 Websites for Retailers, Top 50 Retail Blogs, and the 7 Best Retail Publications just to name a few. KIZER & BENDER are partners and emcees for the popular Independent Retailer Conference recently served as official correspondents for the National Retail Federation’s 2017 Shop.org Digital Retail Conference.

Rich and Georganne are experts on generational diversity, consumer trends, marketing and promotion, and everything retail. As consumer anthropologists they stalk and study that most elusive of mammals: today's consumer. Any speaker can talk about consumers, but Georganne and Rich actually become them. In addition to focus groups, one-on-one interviews and intensive on-site studies their research includes posing as every kind of customer you can imagine. The result of their research is literally straight from the mouth of the consumer: solid ground level intelligence you can use to better serve your own customers.

KIZER & BENDER are married, just not to each other! 2021 marks their 31st anniversary as a speaking team. Their presentations blend brilliant content with colorful examples, humor, and insight. You'll learn while you laugh! And you'll come away with inspiration, ideas, strategies, tactics, tips and techniques you can use the second you return to your business!

See Us In Action! 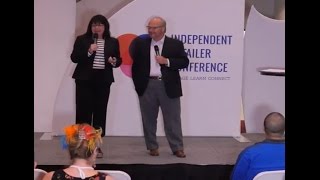 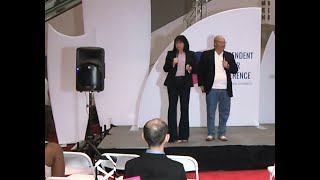 The Crackle Factor: Taking Your Store Off Auto-Pilot!

What Attendees Are Saying...

Dynamic – Informative – Entertaining & getting creative juices flowing. Best workshop/seminar I have ever attended.

Turn an ordinary event into an extraordinary event. Call us or send us an email and we'll send you our complete press kit and preview video on DVD.